I grew up on the water and have been enjoying, promoting and racing sailboats for 60+ years. In May ’12 I joined the TISC Foundation Board of Directors (Welcome to On Clipper Cove).

During college and for 8 years after I crewed with my swimming coach, mentor and “Skipper” Bob Busbey on Moby Dick, Highlander #500. Decades later Bob gave me J/24 #1000 just before he passed away in 2000. He suggested the name “Skipper’s Gift”. I re-built the interior, deck, hull and keel to repair the damage from years of outside storage on The Flats of Cuyahoga River.

After a few years of racing in Marblehead 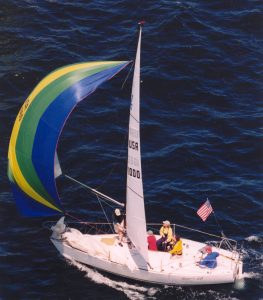 my wife Jane and and I trailered her to San Francisco when we moved to San Jose from Acton, MA in 2003. Our daughter and son-in-law were racing their 505 “Fasterin Fog” in Santa Cruz and on San Francisco Bay and were our connection to Treasure Island Sailing Center.

Jane and I raced 470’s, Lightnings and Snipes together back East where I also taught racing, rules and tactics courses at sailing clubs, Y’s and other venues in New York and Massachusetts. Raising two children, coaching youth soccer, advising youth fellowship groups and chaperoning mission trips filled the time between Snipes and Skipper’s Gift and provided me with many opportunities to connect with kids of all ages. 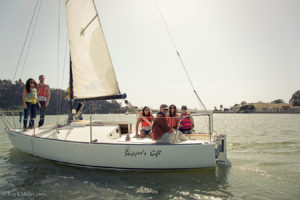 Whether sailing, travelling or participating in other activities our family passwords have always centered around being flexible and available. And NO whining ! I hope everyone who reads this blog is on the “same page” with me regarding TISC – a Launching Point for New Horizons.

After spending 14 years on the “Left Coast” with our Daughter and her family we moved back East to Bristol, RI. to be closer to our son and his family after our new grandson Charlie joined our lives. He also enjoys time on the water, especially when joined by his cousins Owen and Scott. Soon, Charlie’s brother Teddy (born May, ’19) will be on board as well.

When Skipper’s Gift splashed down in Bristol Harbor in June, 2017 she completed a 7,000 mile “drive-about” of the US: Built in Warren in 1978 about 7 miles away from her current mooring behind our home, to Cleveland, then Marblehead, on to San Francisco Bay and now back to Bristol.

One thought on “About Skipper’s Gift”