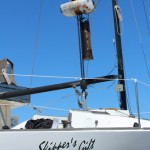 Skipper’s Gift made a great work platform, however if you’re a sailor, you won’t be surprised to hear that stubborn bolts don’t always free up as easily as hoped, so “beating rush hour traffic” was not in the cards. 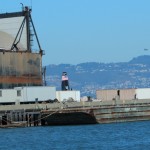 My delayed departure provided an opportunity to wave to Oracle 5 team on their way “home from the office”, 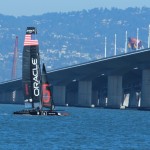 connect with a few members of the California Golden Bears Sailing Team and take a couple hundred pictures of FJ’s in Clipper Cove with Bay Bridge and Oakland as a backdrop.

The collegiate season has started, and the Cal team practices here M/W/F (next year I promise to visit “Team Racing Tuesday” so I’ve covered all the daily race events). 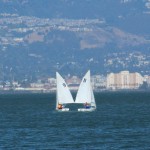 On Monday I was able to combine both “f8 and be there” with “f28 and hold it steady” using the awesome camera I received from the PrimeTime team when I retired from Synopsys.  Here are 58 pictures of Cal Sailing Team On Clipper Cove.  NOTE: password to view these pictures is “GoBears”.

The Cal students are great team players on and off the water. Their volunteer work at Treasure Island Sailing Center is greatly appreciated – 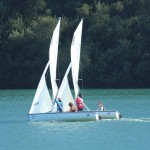 Thanks for all you do for TISC and the Sailing Community! 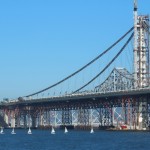 Many folks have asked about the huge floating dry dock around the corner from TISC.  Here are two links with additional information:

Declassified $170million Cold War Stealth boat called the Sea Shadow is snapped  up for $2.5million… but you can’t take it for a spin round the bay
Read more