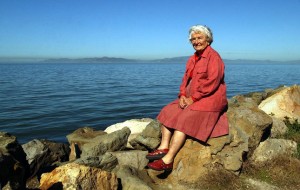 Sylvia McLaughlin is one of three East Bay women who co-founded the Save San Francisico Bay movement in the 1960s, to stop the Bay from being filled to create more land. On Wednesday, Aug. 30, 2005, McLaughlin enjoys the Bay views from Cesar Chavez Park. (Joanna Jhanda/Contra Costa Times)

Sylvia McLaughlin died at her home in Berkeley yesterday. She and two friends, Kay Kerr and Esther Gulick, launched “Save San Francisco Bay Association” 55 years ago. Many pledged support; however, these ladies took action and literally saved the Bay.

They were saddened and shocked at the rate at which San Francisco Bay was being filled in for airports, harbors, homes, offices and garbage dumps.  Even worse, an Army Corps of Engineers report showed the feasibility of easily filling in most of the Bay resulting in what one biologist described as a “biological desert”.

The January, 1961 meeting in Esther’s home on Grizzly Peak lead to legislation to protect the bay. Their first project stopped Berkeley’s plan to fill in 2,000 acres of the Bay.

In attendance at their first meeting were representatives from The Audubon Society, Save-the-Redwoods League, Sierra Club and more.  All pledged support for the Bay but were not prepared to take up a challenge that pitted public access against railroads, cities, developers and California’s plan to build freeways on reclaimed land.

Sylvia, Kay and Esther were prepared and motivated. And smart. They understood the importance of getting the public involved.  They realized that “everyone” wanted to fill in the Bay – everyone except the people.

The many reports, analysis and songs – Pete Seeger released “70 Miles” in 1965 – make for interesting reading (and listening).  The actions taken by these savvy, spirited and driven ladies (they were called conservationists at the time) have served as a “road-map” for other environmental groups.

The California Legislature created the Bay Conservation and Development Commission in 1965 to regulate development and shoreline access. No way would this have happened without Sylvia, Kay and Esther.

We all owe so much to these ladies.  Speaking for everyone at Treasure Island Sailing Center we say THANK YOU for making our programs possible.  Without their tireless efforts on behalf of public recreation, Clipper Cove, this unique gem on San Francisco Bay, would not exist.   And there would not be any ecology or history for studying by our Set Sail Learn students.

Regards from On the Cove, Dave G.

Much has been written about the debt of gratitude owed to Sylvia, Kay and Esther. Below are three references you should read: