Except when they head out from Clipper Cove for their annual “Round-the-Island” race each year. On Saturday, June 21 they left the Cove for a clockwise circumnavigation of Yerba Buena and Treasure Island. TWENTY boats on the line, one of the larger events other than National Championships in the last decade. Results (congrats to top five Dan/Claire, Ty/Tiffany, Lindsey/Elena, Cole /Yuri and Sam/Kristin) are HERE. Special call-out to Matt Bernard who singlehanded Jeff Knowles’ old boat, the Jack-A-Roe.
How come a trumpet on the perpetual winner’s trophy ? 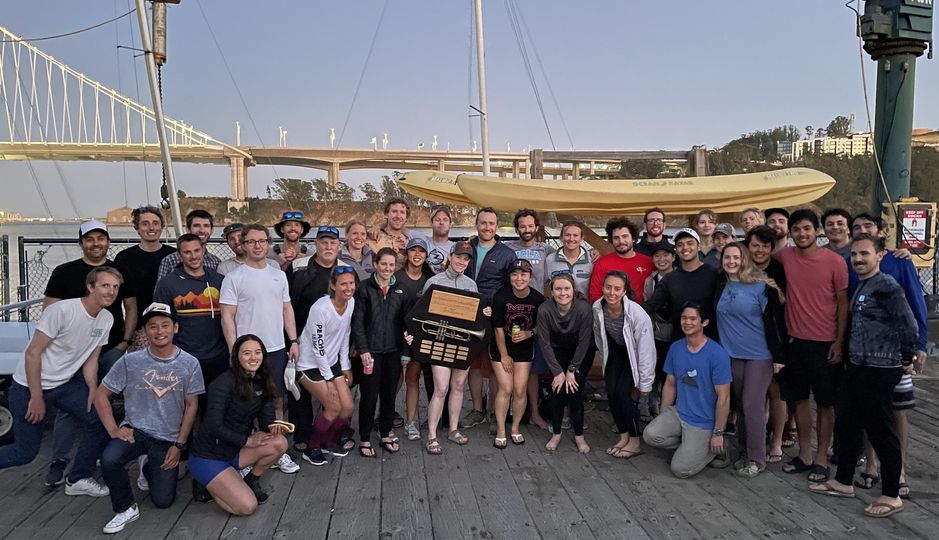 According to fleet captain Sam Wheeler, this annual race is sailed in honor of Jeff Knowles, master sailor, adventurer, and consummate V15 racer. He held the speed record for a modified V15 – think mast replaced by huge kite. 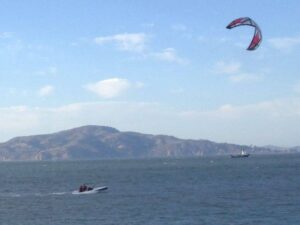 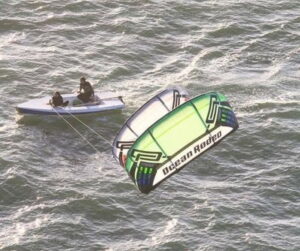 Jeff died in a kite-boarding accident in 2018, and is greatly missed by all who knew him.

He was a trumpet player who occasionally busked on street corners. At least once he played a 3-minute start sequence on his trumpet for a dinghy regatta. Hence the trumpet, purchased and donated by a friend who didn’t know Jeff, however was inspired by his story.

So even though the fleet was “outta here” for an afternoon, they still call Clipper Cove home and have been active supporters and volunteers on the cove and at TISC for two decades.
No sailing event, on land or water, can happen without support, and for the “Around-the-Island” race thanks to Ian McClelland for running the race, and to the Rivlins for providing Panthera as the committee/chase boat.

Regards, from On The Cove, Dave G

They’re Back On Clipper Cove !!

Over the weekend of August 27/28 V15 Fleet 53 hosted the 2022 V15 National Championships on Clipper Cove. Shout out to Steve Kleha and Claire Pratt for their back-back win, the first-ever in the 29 year history of the event. More good news – Steve, along with Nick Adamson, welcomed our juniors, helped to set up 3 boats, and coached them throughout the weekend. TISC fielded 5 youth race team members sailing in the fleet and now the kids are really psyched to sail Thursday nights next season.

So a big tip-of-the-cap to the TISC V15 fleet and their sponsor West Coast Sailing.

More photos and results from the Nationals will be posted here: https://www.facebook.com/SFV15