The firsts accompanying Leonard Flynn Elementary School kids to Clipper Cove paled by comparison to what we all considered a life-changing story. Credit TISC’s STEM-based experiential learning program – and our SSL team – for more than just smiles on that day.

Last Tuesday served up notable firsts on TISC’s docks. Our new Program Manager Laura DeFelice, shadowed our Program Coordinator Luxine Smith, witnessed and learned to teach her first class. The 26 4th and 5th grade students from Leonard Flynn Elementary reveled in their very first sailing experience. In many ways a day not unlike those experienced by the 5,526 SFUSD students, including three previous Leonard Flynn classes who have benefited from our Set Sail Learn program to date.

The April 17th conditions were ideal for a first-sail. The April morning sun shone through some light cloud cover and the warmth of the sun prevailed over the cool light morning wind. The students arrived as they often do, loud and full of excitement. Their energy is contagious.

The group met under our big top tent and divided into two groups: one that would begin their classroom lesson, The Power of the Wind, and another that would go sailing. Of course, everyone wanted to go sailing first. Or did they? 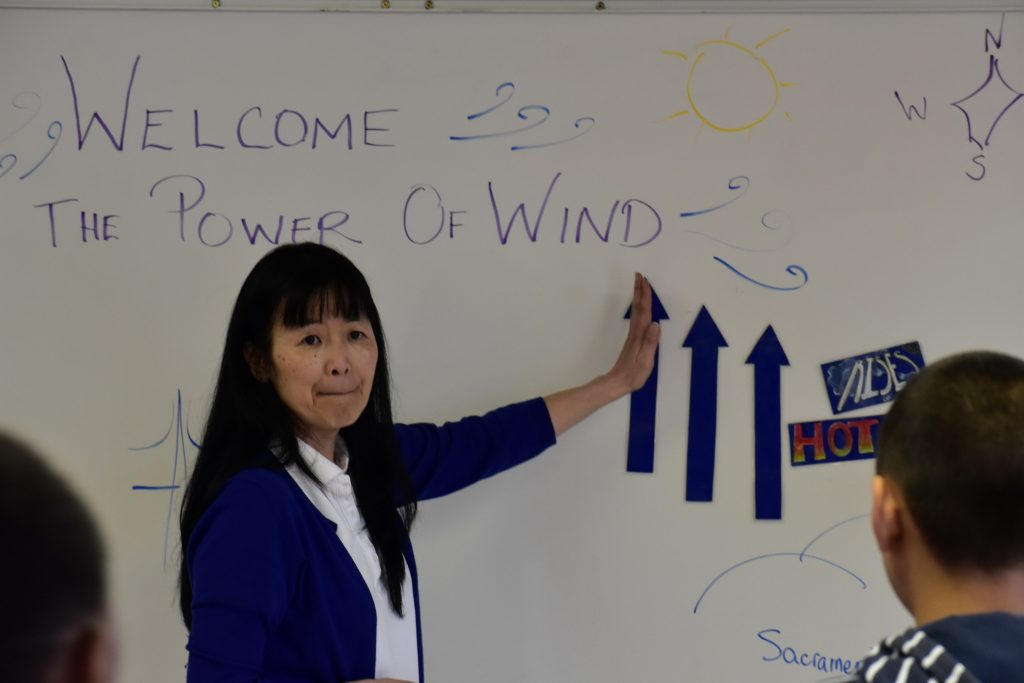 One student, 10-year-old Rosa, walked deliberately with her classmates and chaperones as they were guided to the docks. The girls and boys were so excited to get going, and TISC’s instructors kept a watchful eye until they were briefed, donned life jackets and allowed to board the boats. They stood at attention listening to each instructor’s direction before springing like horses out of the gates to get on the boats. 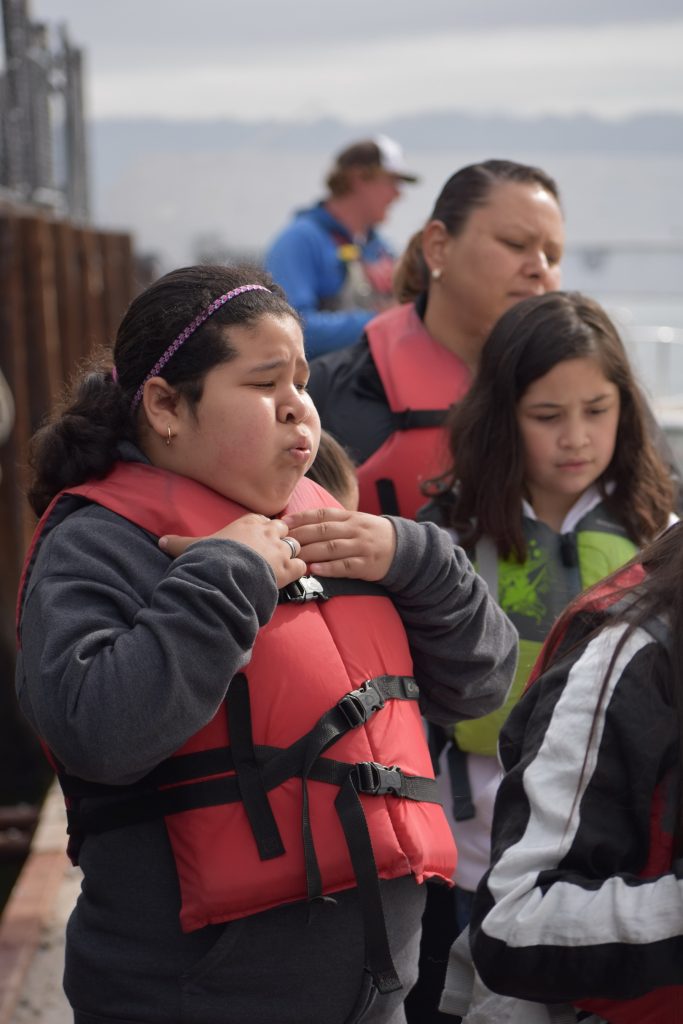 The first J/24 departed and then the second. While all the kids on boat 3 were ready to go, they had to wait while the chaperone and I comforted Rosa, whose eyes filled with tears but never spilled. Her hands shook and she breathed deeply as though preparing to take a deep dive into pool from which she was certain she’d never return. Her classmates pleaded with her to come aboard, and although she never demanded to leave, was never committed to going.

After a few moments of convincing, Rosa was encouraged to sit in the boat’s companionway halfway in the cockpit where she felt safe. The chaperone sat next to her and held her hand; as the boat finally left the dock Rosa uttered “I want to go back”. But it was too late! She was sailing.

I waited on the dock and prepared to scramble the safety boat, but Rosa stood fast and kept going.  Her sailing instructor, Bruce, shouted, “She’ll be OK in a few minutes. It’s always these ones who have the most fun.” 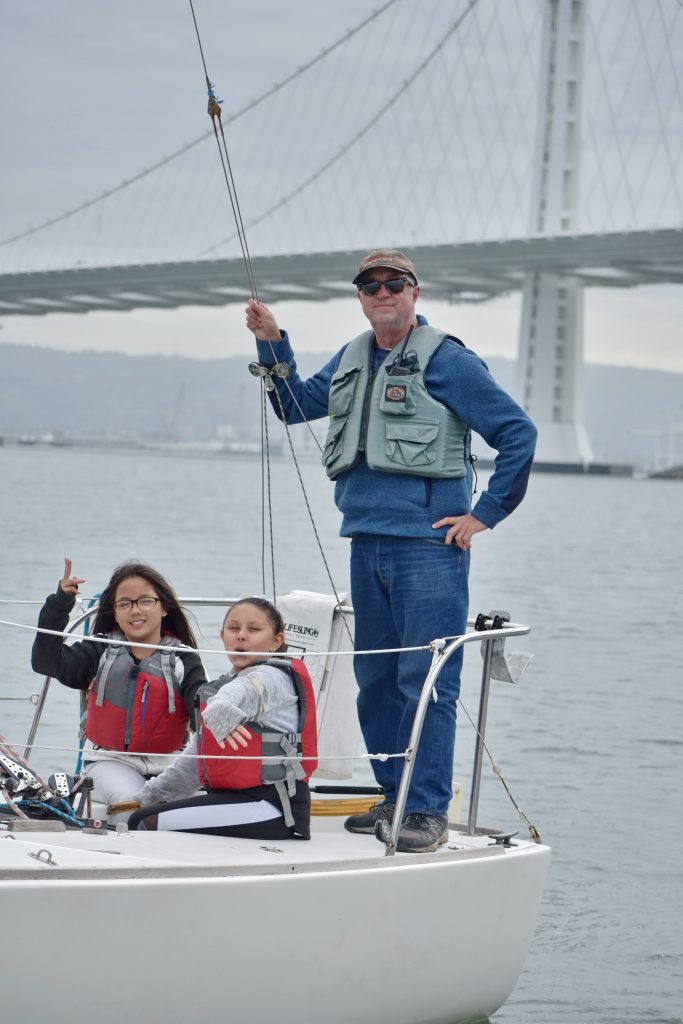 And he was right!

Before the boats could make one loop in Clipper Cove, Rosa was already at the helm. Bruce is an expert with kids and made sure he could instill the confidence Rosa needed to become strong and face her fear. 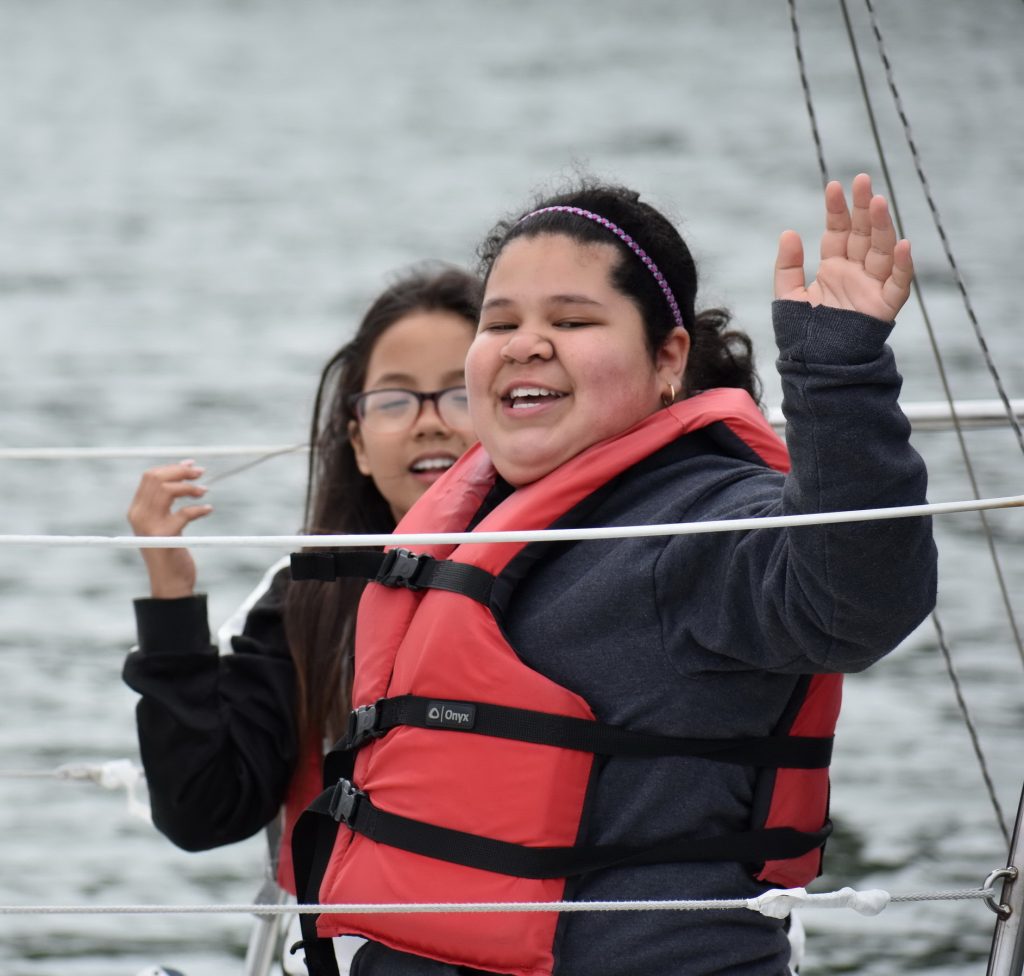 As she steered the boat downwind, it was apparent Bruce had done his job and Rosa had made a tremendous step forward. Her transformation was empowering for her classmates and everyone involved. 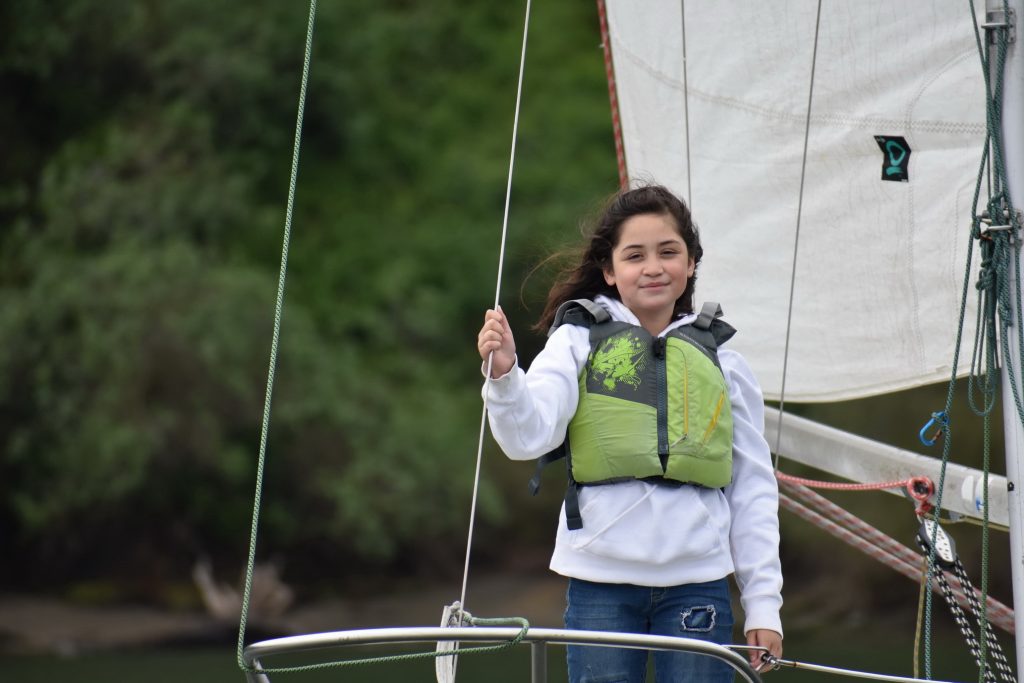 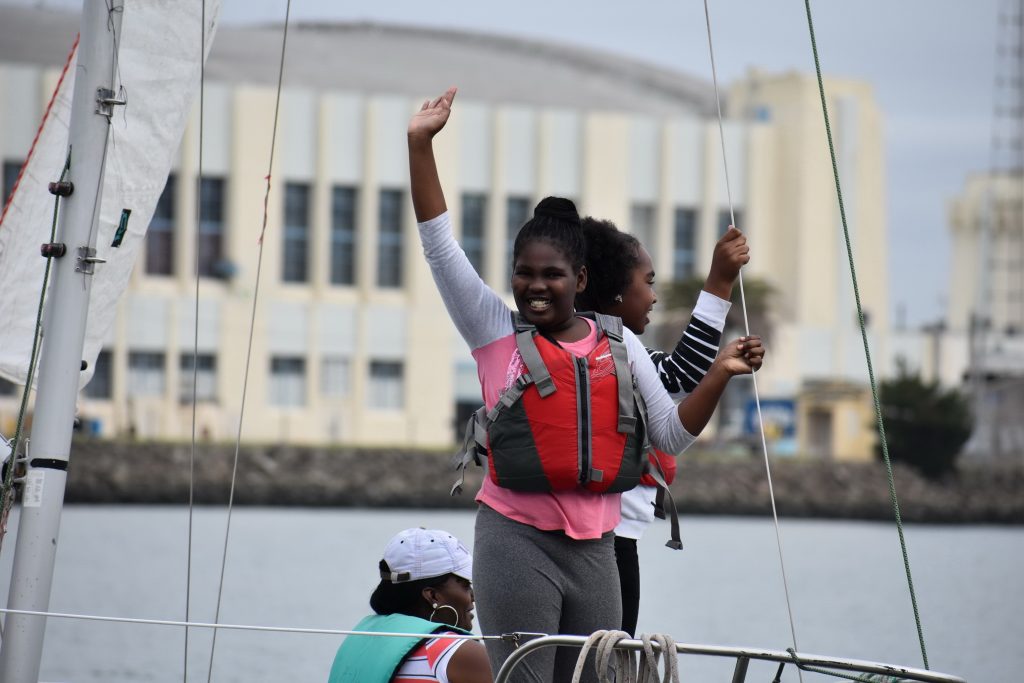 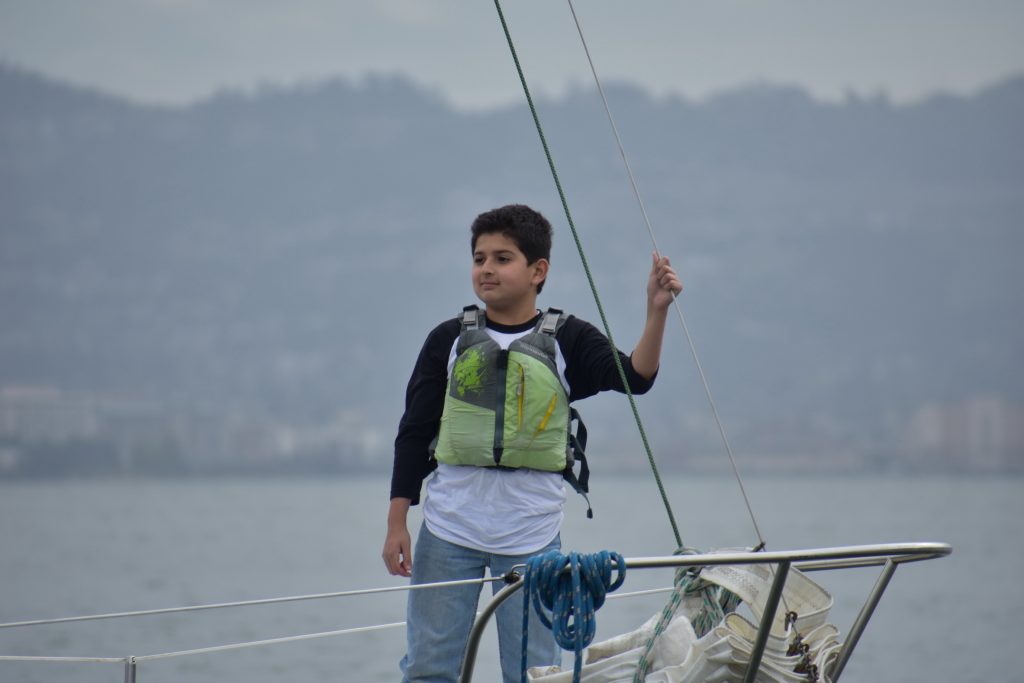 Afterward, Rosa said, “Before I went sailing I felt nervous, scared and frightened. After sailing around the bay I felt happy, excited, and joyful.”

And check out the smiles from her classmates: 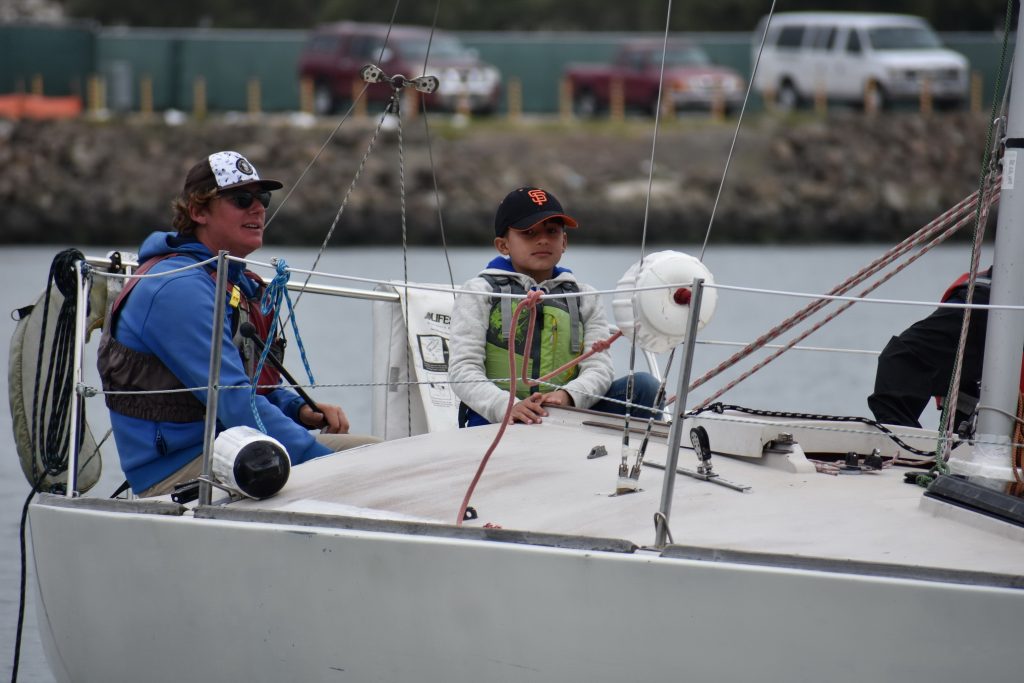 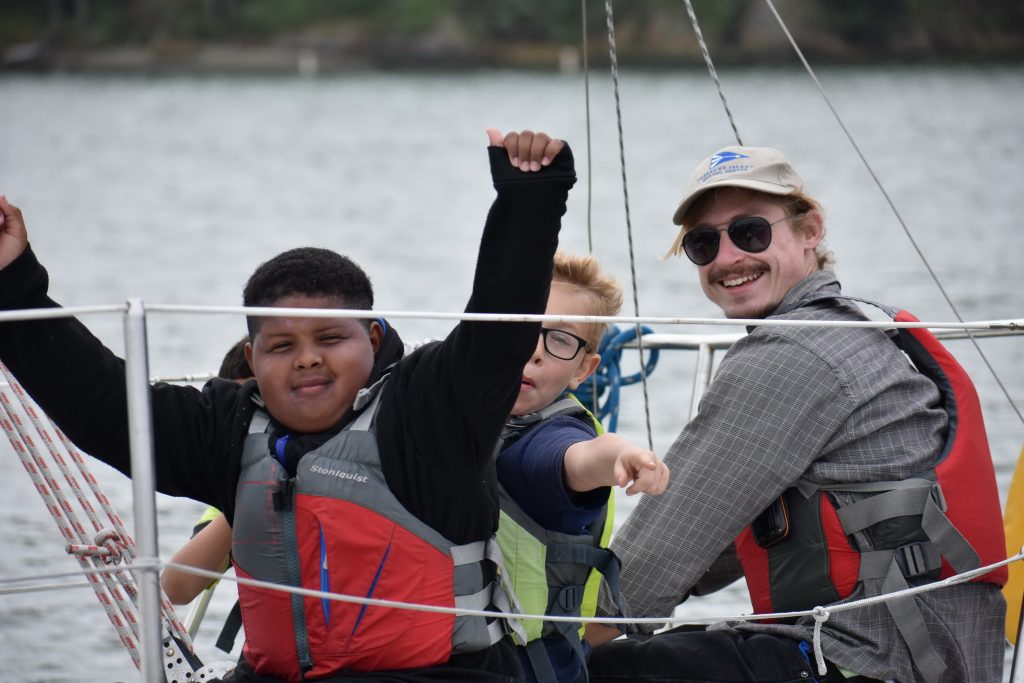 While this was certainly Rosa and her classmates’ first sail, it might also have been the first big step forward in learning to conquer fear.

Although they later enjoyed their Power of the Wind lesson in the classroom (who wouldn’t have fun building wind-powered land yachts), 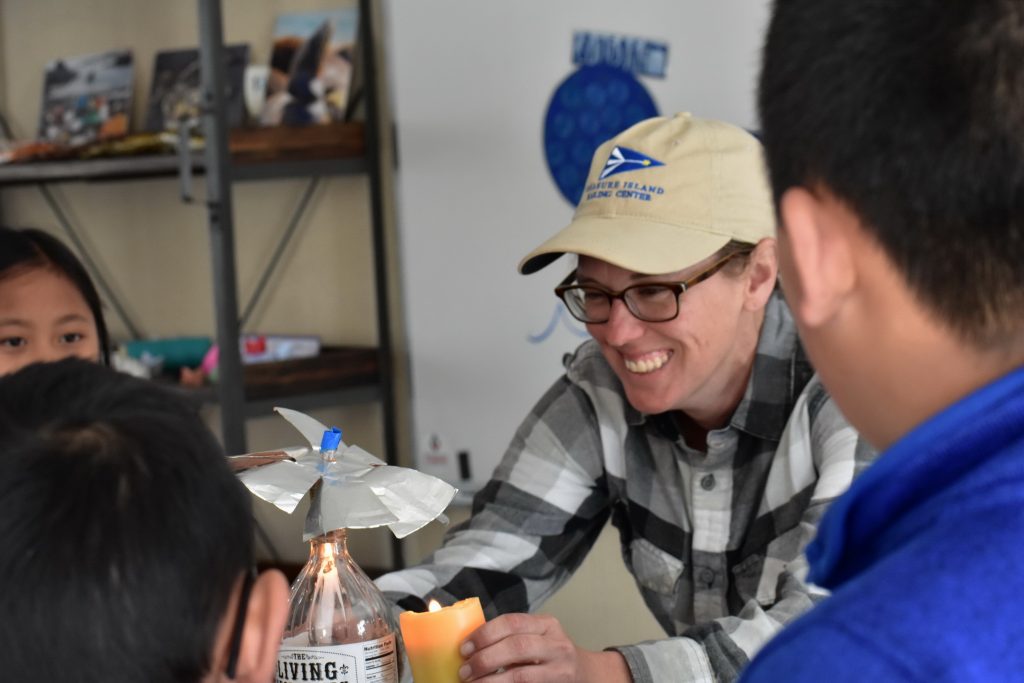 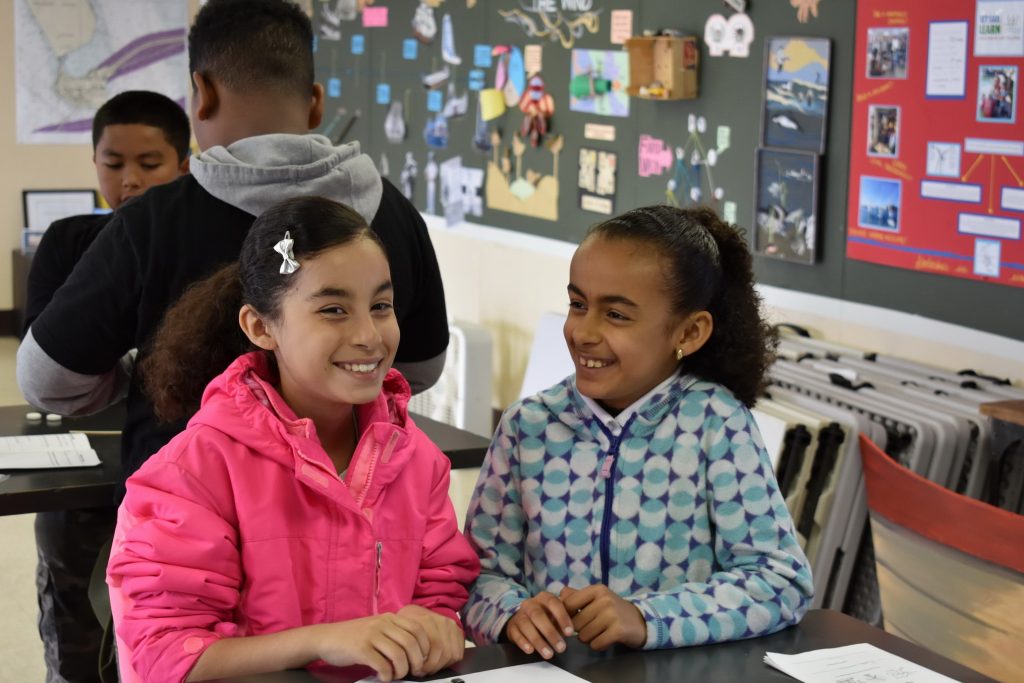 these kids will never forget the power they felt in that very light morning wind while sailing in the safety of Clipper Cove.

Regards from On the Cove, Travis

In case you missed our April newsletter, you can read about it here.

While the level of high school racing is a step above Set Sail Learn in terms of sailing abilities, these two activities share one thing in common – The life lessons, friendships and joy of sailing in the protected safety of Clipper Cove.  Below are a few photos from the 2018 Golden Bear regatta attended by 256 sailors and another 150+ parents, friends and coaches from 26 high schools.  What a scramble at the docks when 4 divisions switched teams in 64 boats !

Did I mention- THANK YOU VOLUNTEERS ! 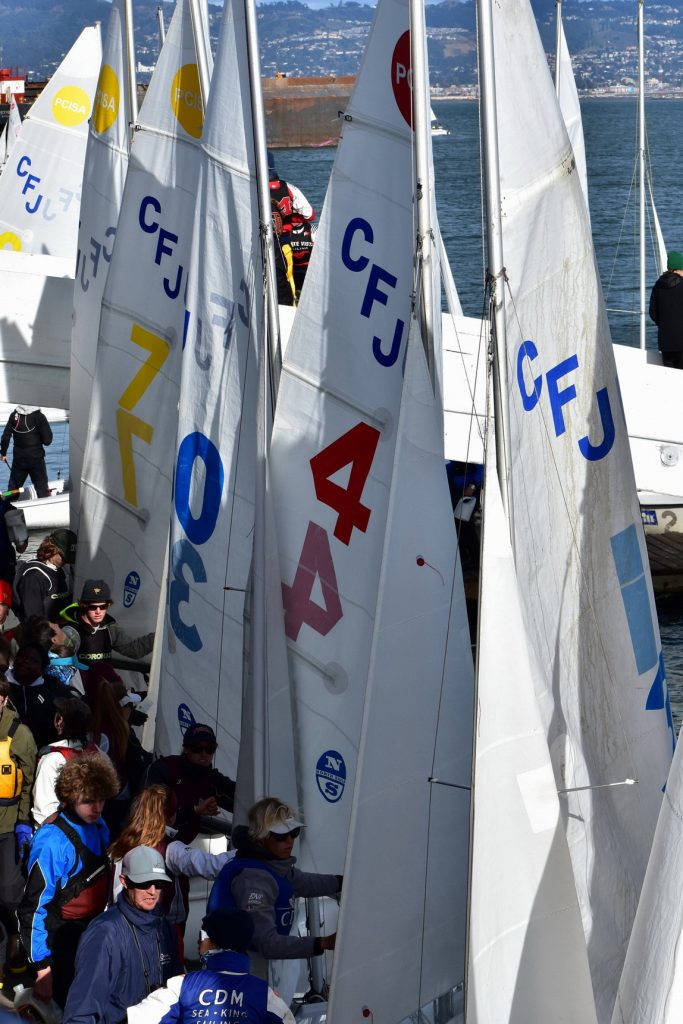 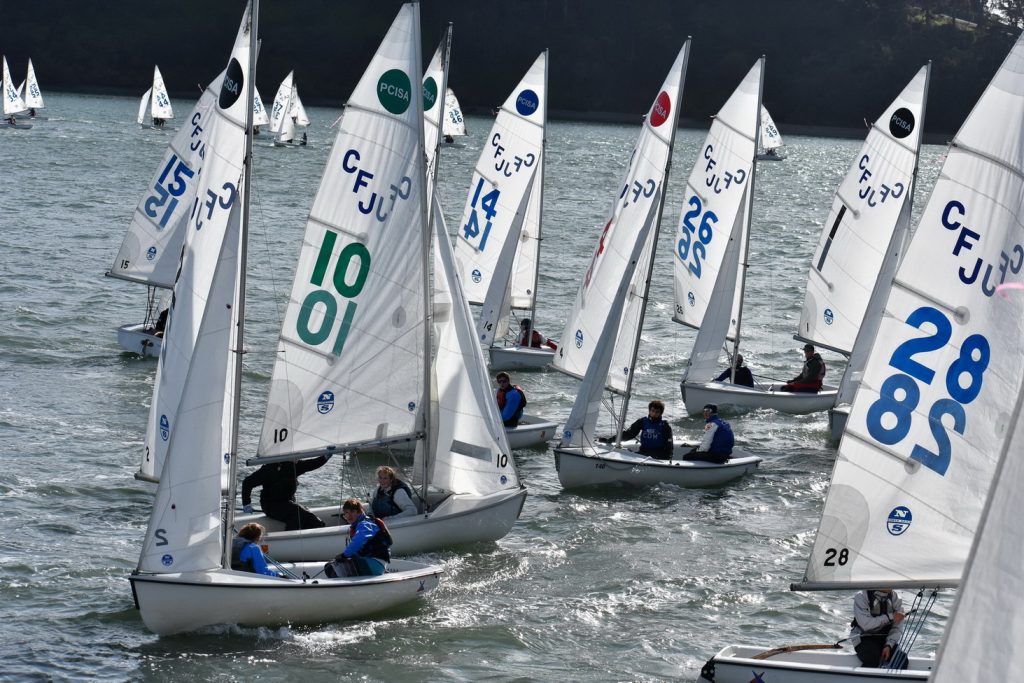 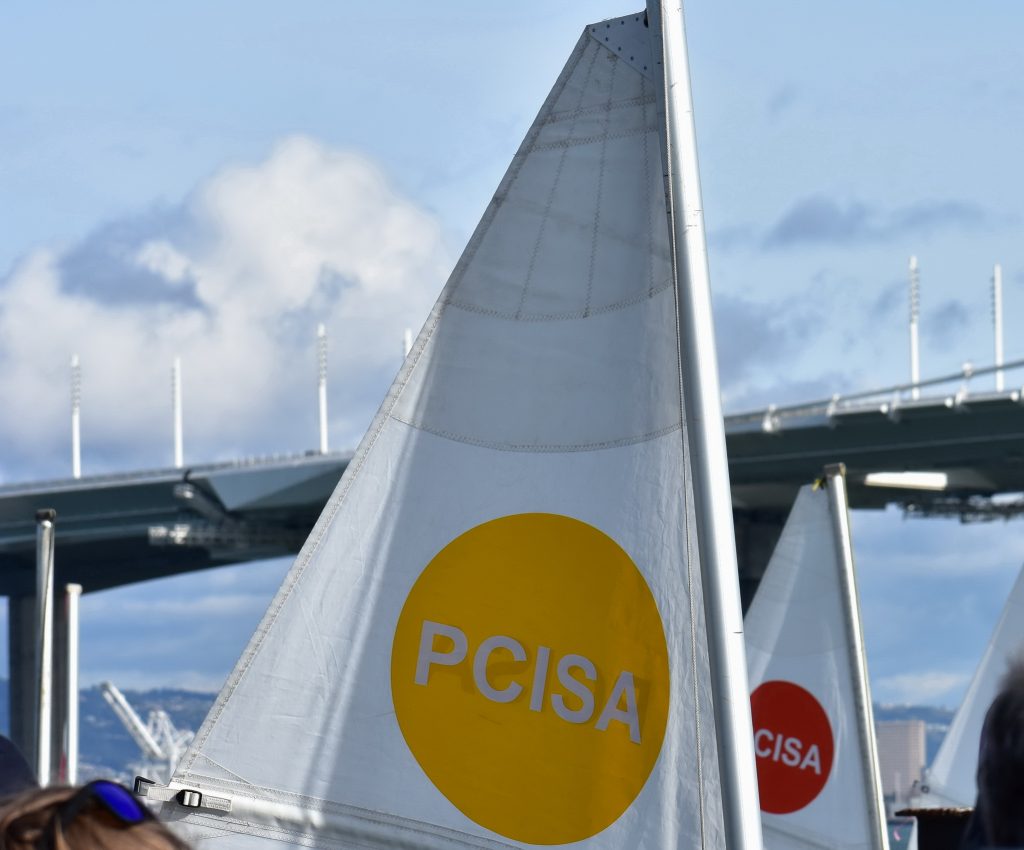 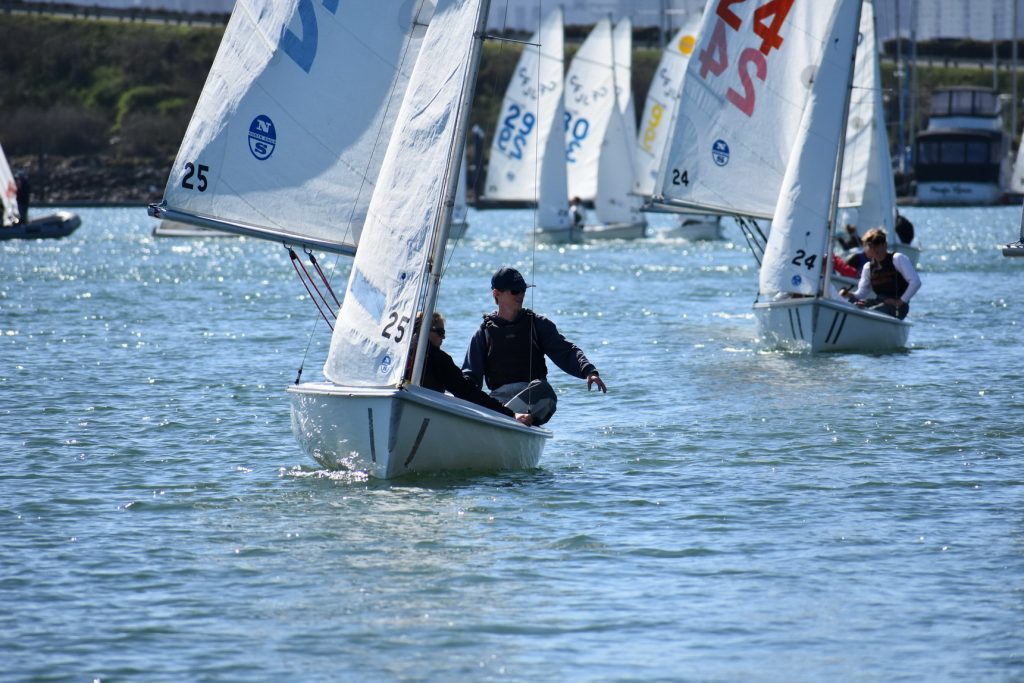 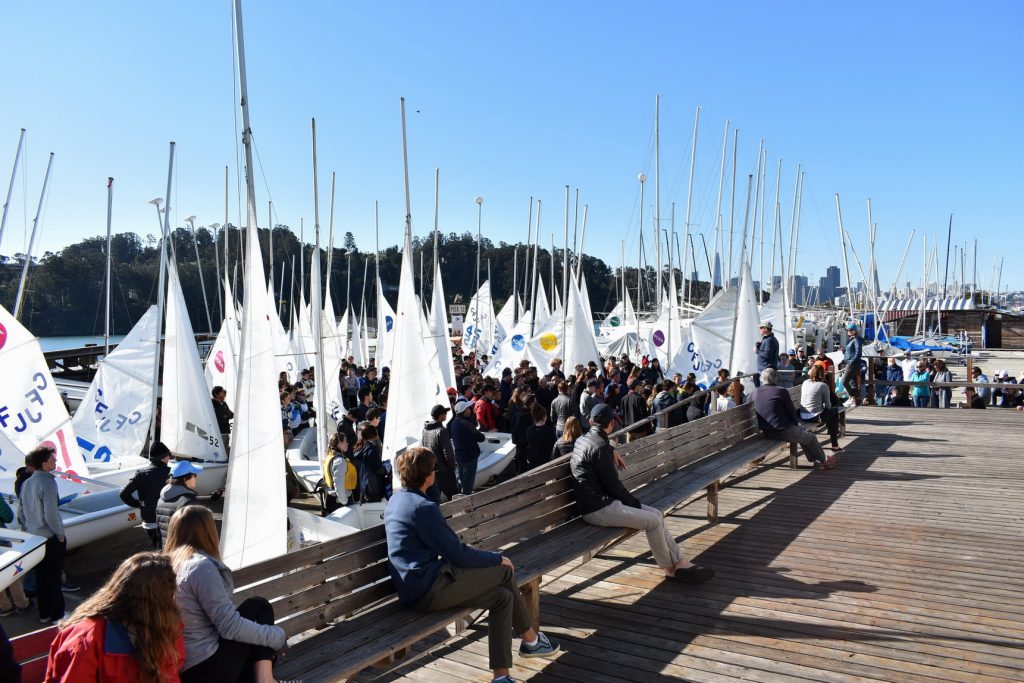 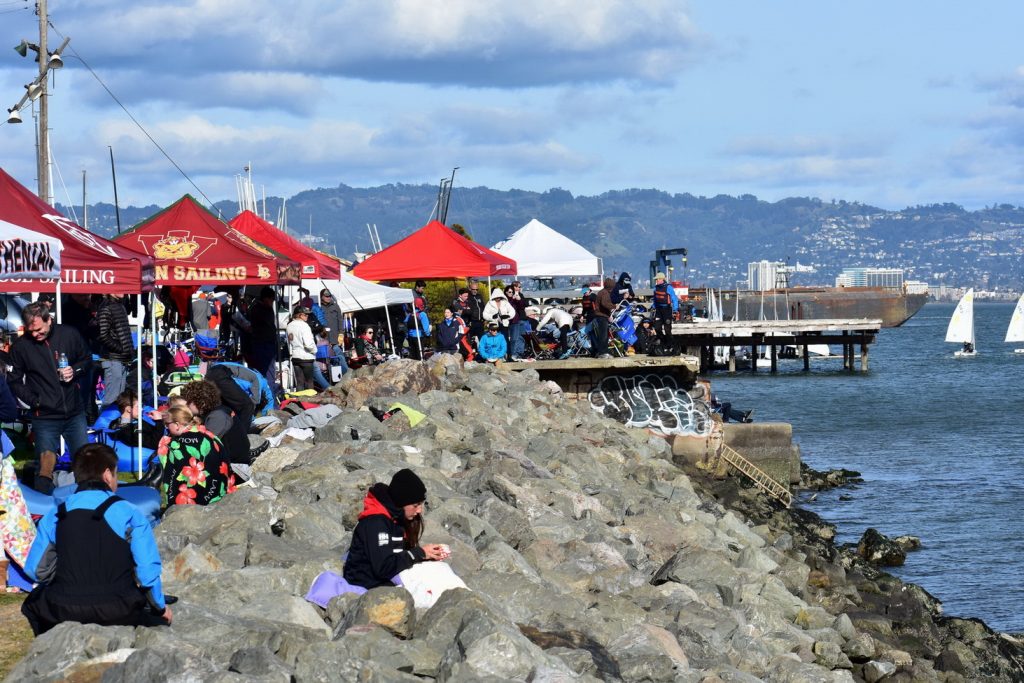