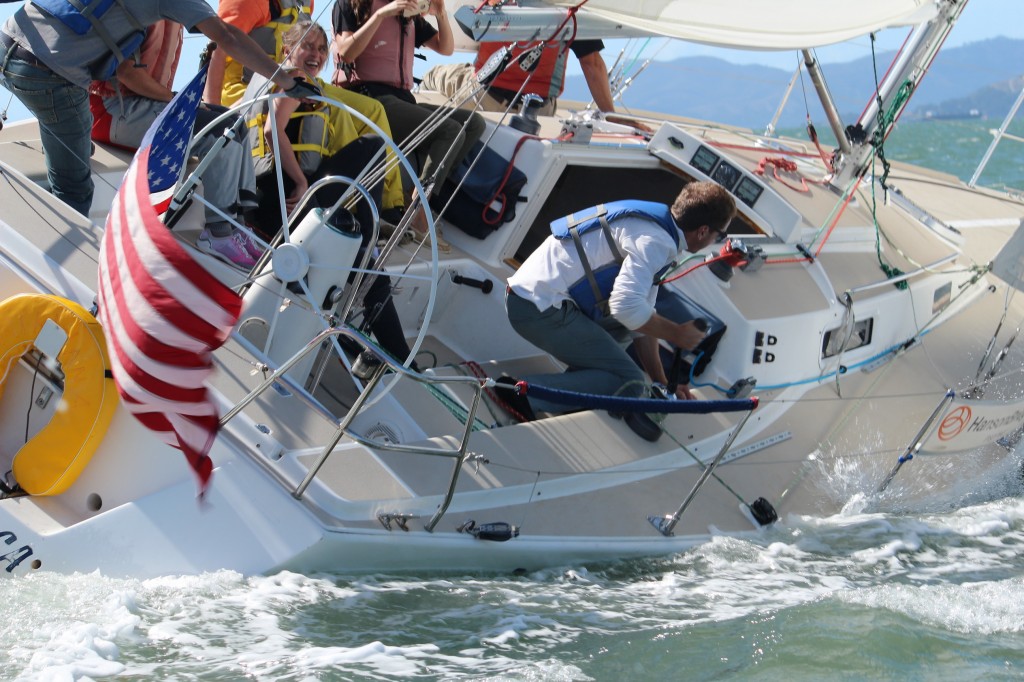 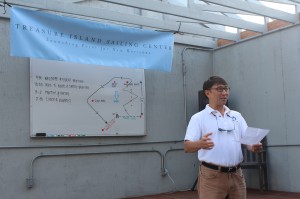 Friday was all about teamwork. Following a safety briefing from our regatta PRO Tim Han crews from Hanson Bridgett and PG&E boarded sleek OCSC J/105’s then headed out to Berkeley Circle to battle the clock as they learned all about apparent wind, tacking angles, winch handles and the physics of sailing.

The objective: sail a triangular shaped slalom course faster than the other team. 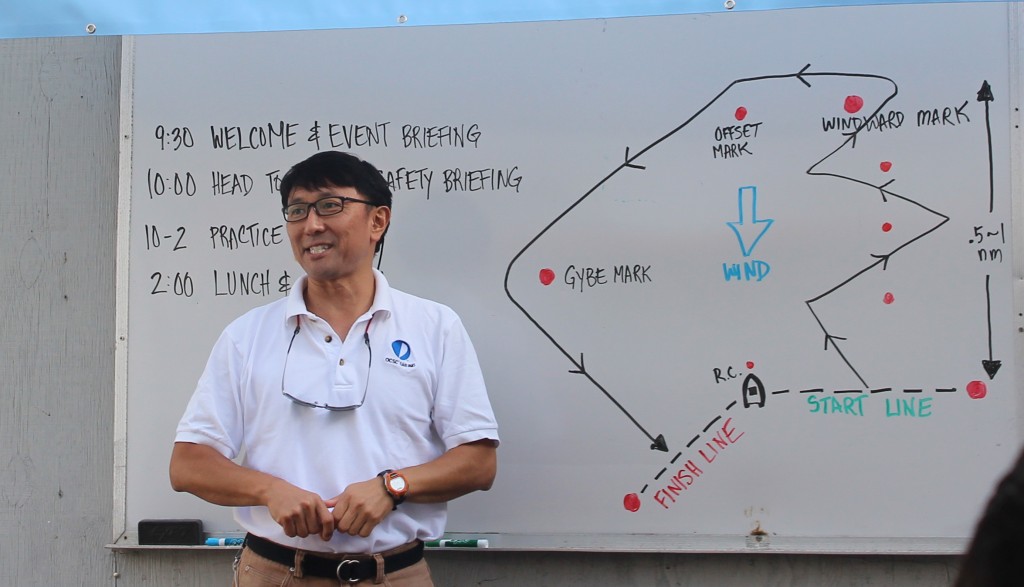 Conclusions: practices pays off, working as a team is key and boats sail faster as the wind builds. Oh – and sailing J/105’s on San Francisco Bay is wicked awesome fun ! Especially when you have expert OCSC coaches trained in teambuilding on your boat to guide you around the course.

Peet’s Coffee in Berkeley once again contributed the morning Java for BTR.  Thanks to 49 Square Catering the contestants were well fed prior to Tim Han’s pre-race briefing. 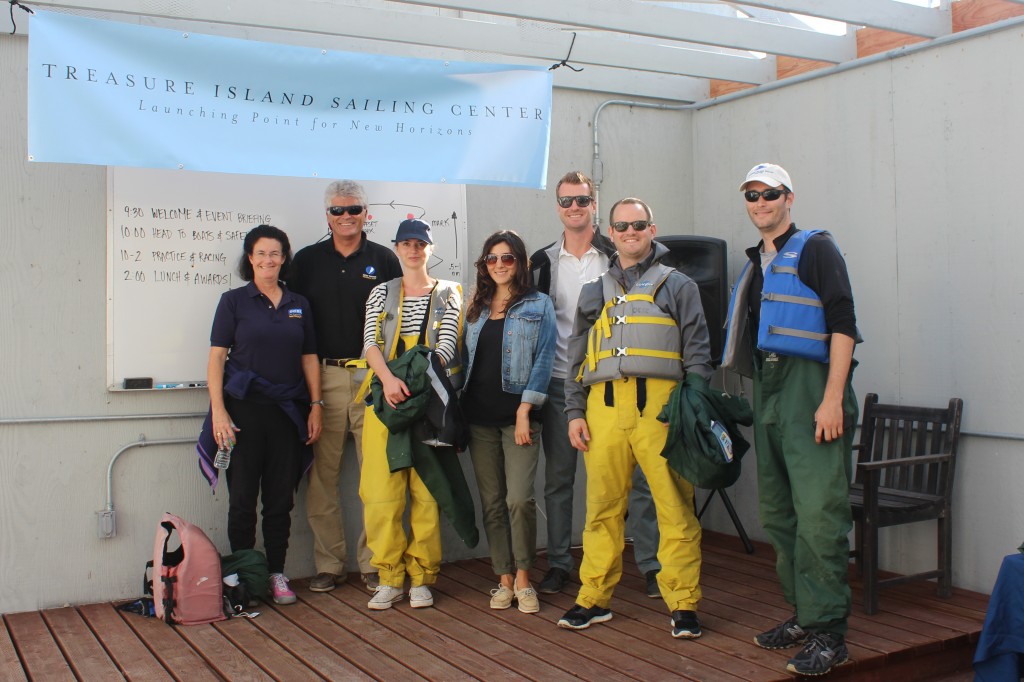 The PG&E team gets psyched for the day of racing.  The PG&E Community Service page is HERE. 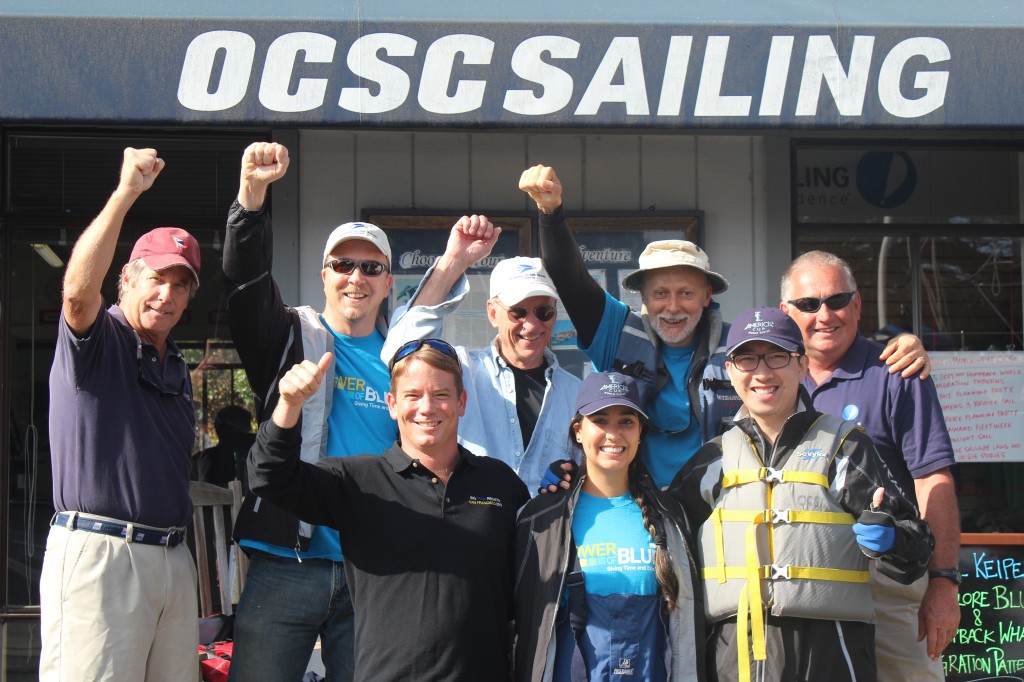 The early morning breezes provided a good warm up to the boats and provided the crews time to work out optimum positions and responsibilities.  Once on the water the OCSC instructors took charge of converting the newbie crews into racing teams.  Ashley Tobin and Jim Watters coached the Hanson Bridget team; Rich Jepsen and Trevor Steel teamed up to train the team from PG&E. 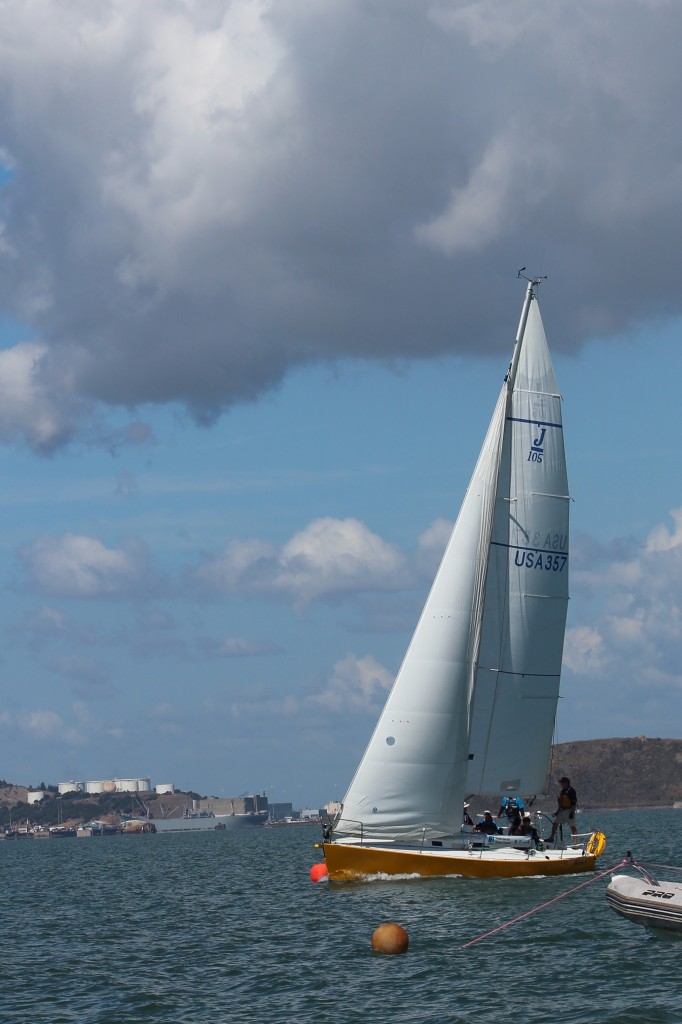 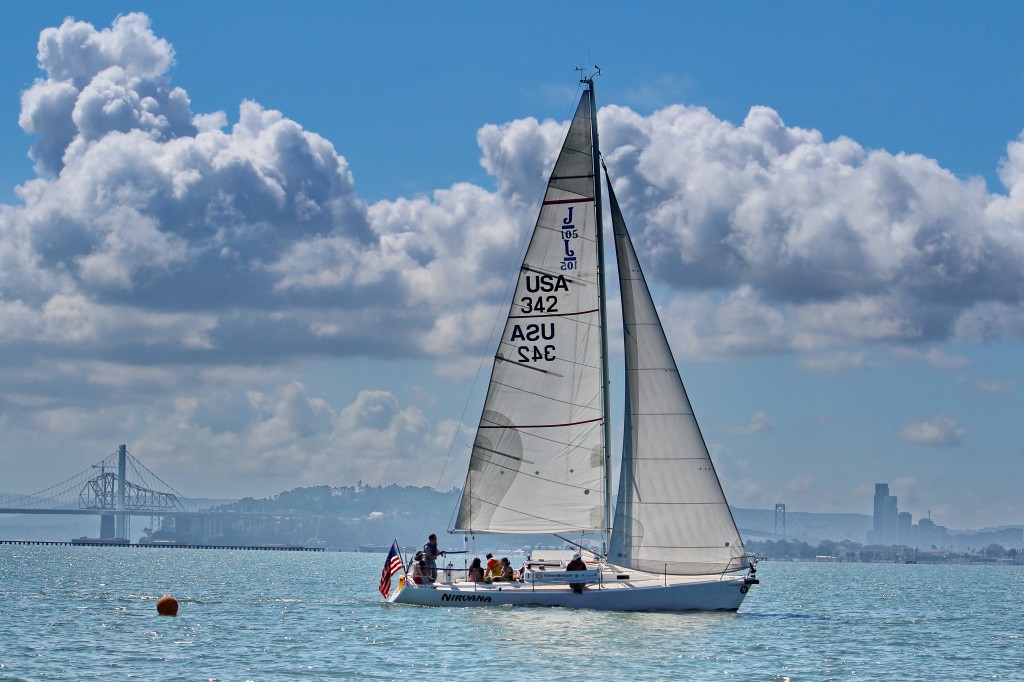 Around noon the westerly filled in and continued to build into a 10-15knot breeze by 2pm.The two crews were soon actively engaged in all aspects of boat handling from grinding genoas to trimming the mains to holding a proper course while beating upwind and reaching off the wind. 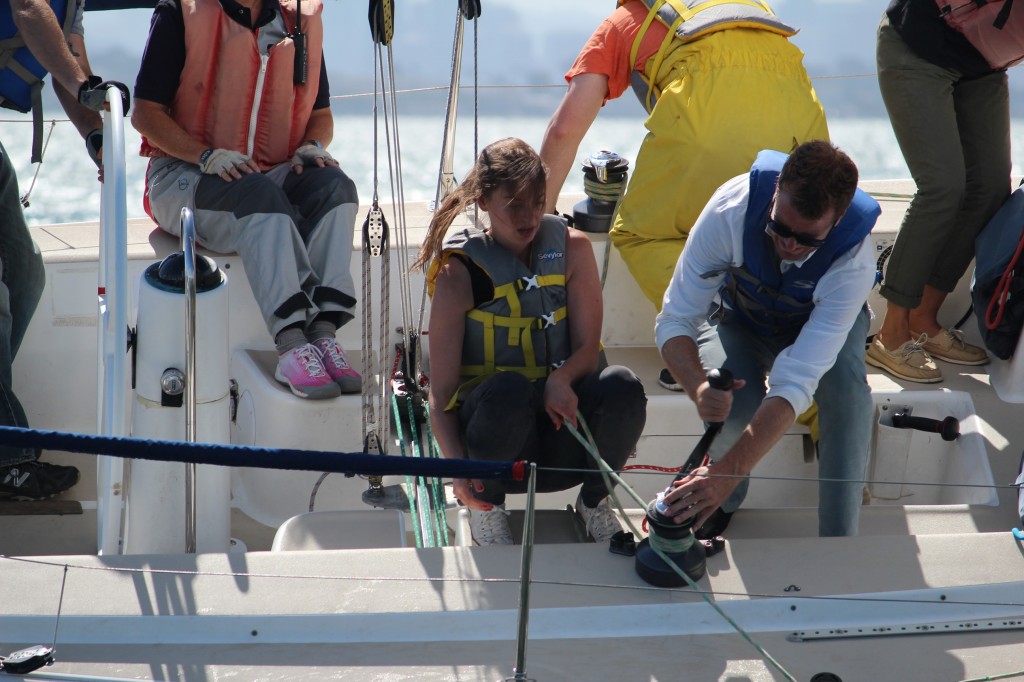 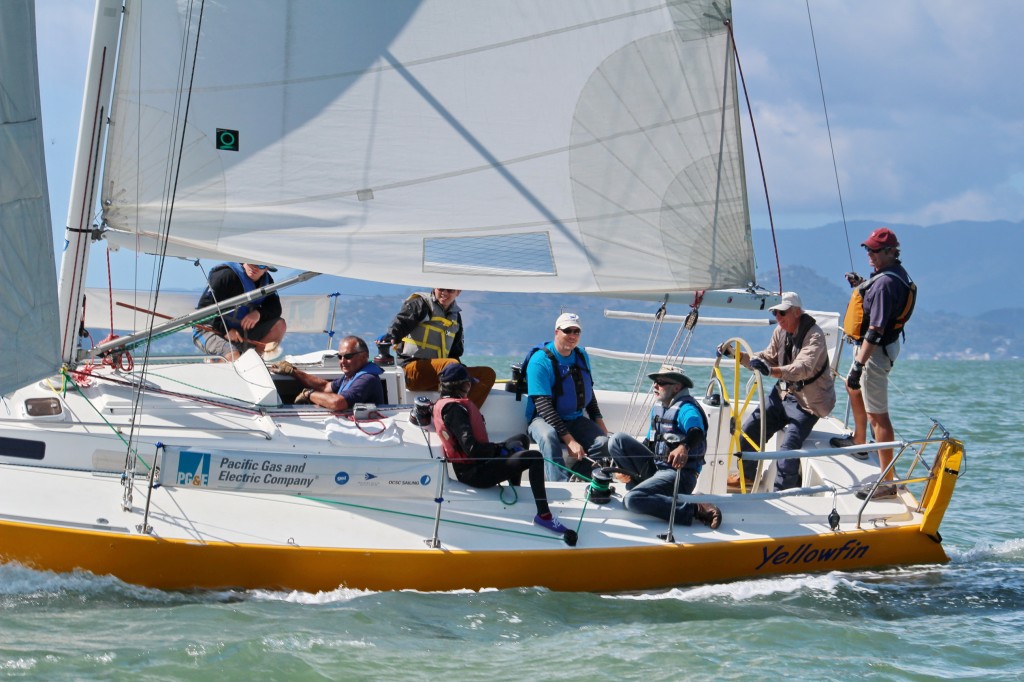 As the racing progressed the J/105’s really came to life, especially on the upwind legs. Teamwork was the only way to complete the tacking needed to navigate the windward slalom course.  Off the wind sail trim and straight courses were the way to beat the clock. 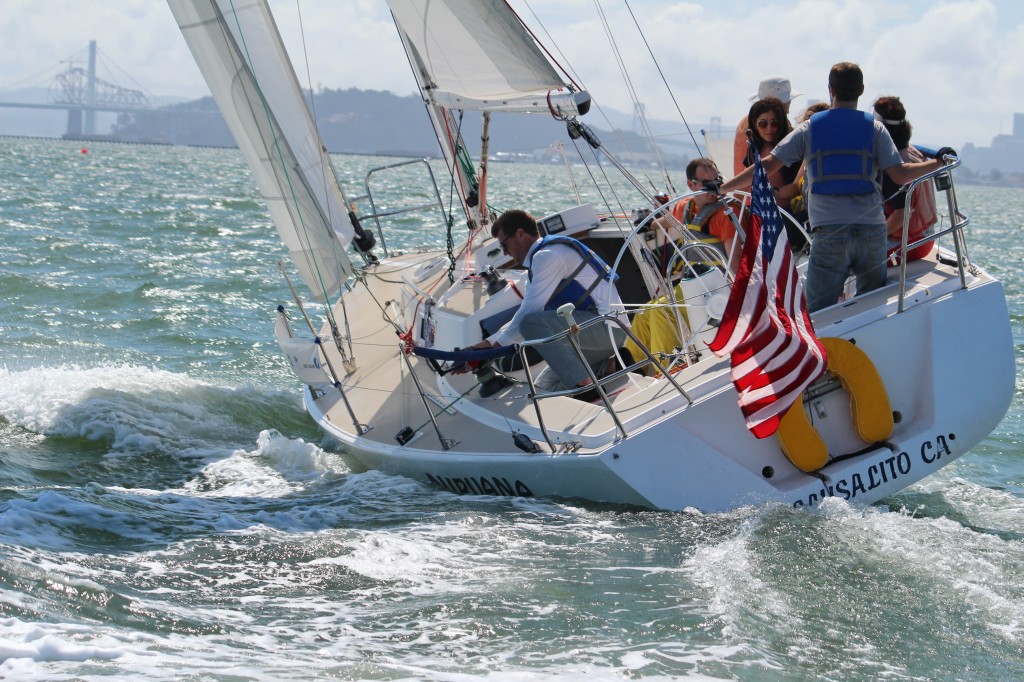 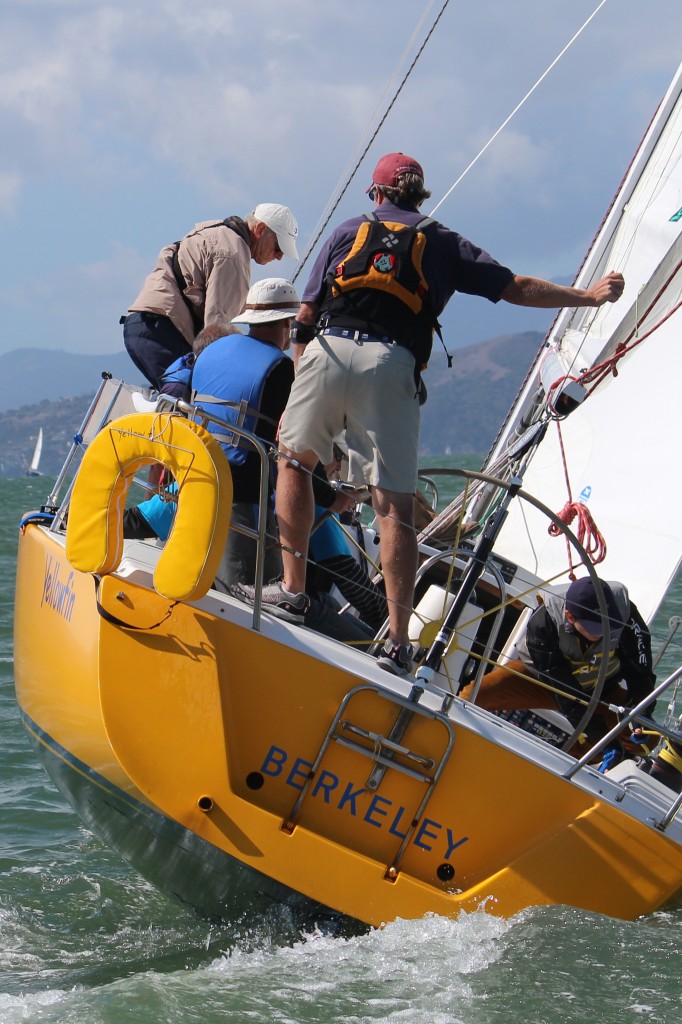 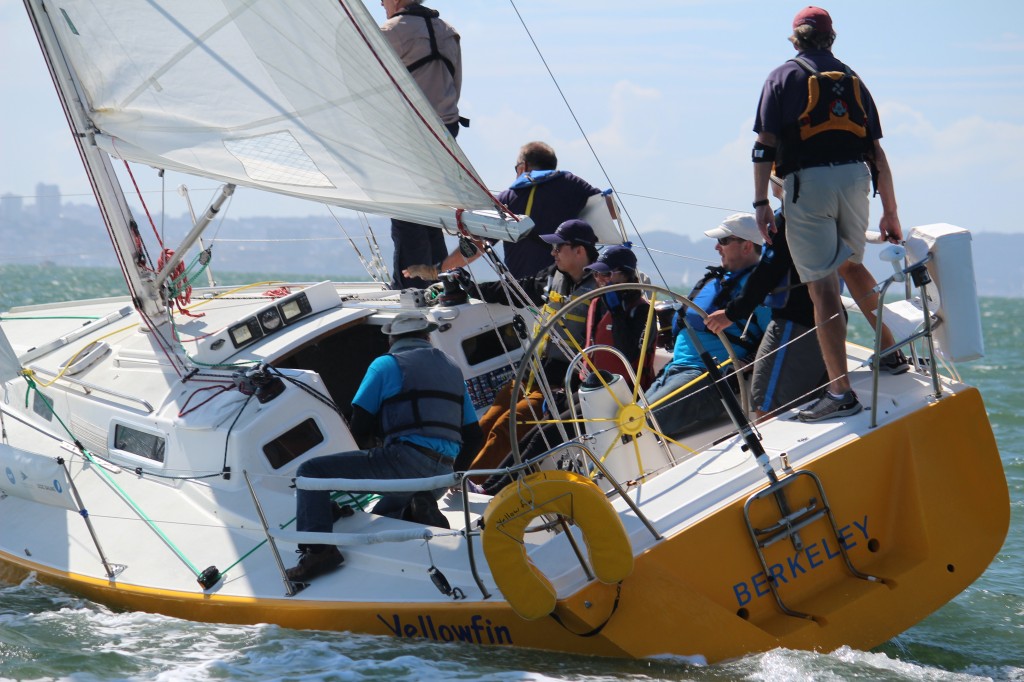 The races were held on the Berkeley Circle. Backdrops were provided by the Golden Gate Bridge and the loading cranes on The Alameda just south of the Bay Bridge. 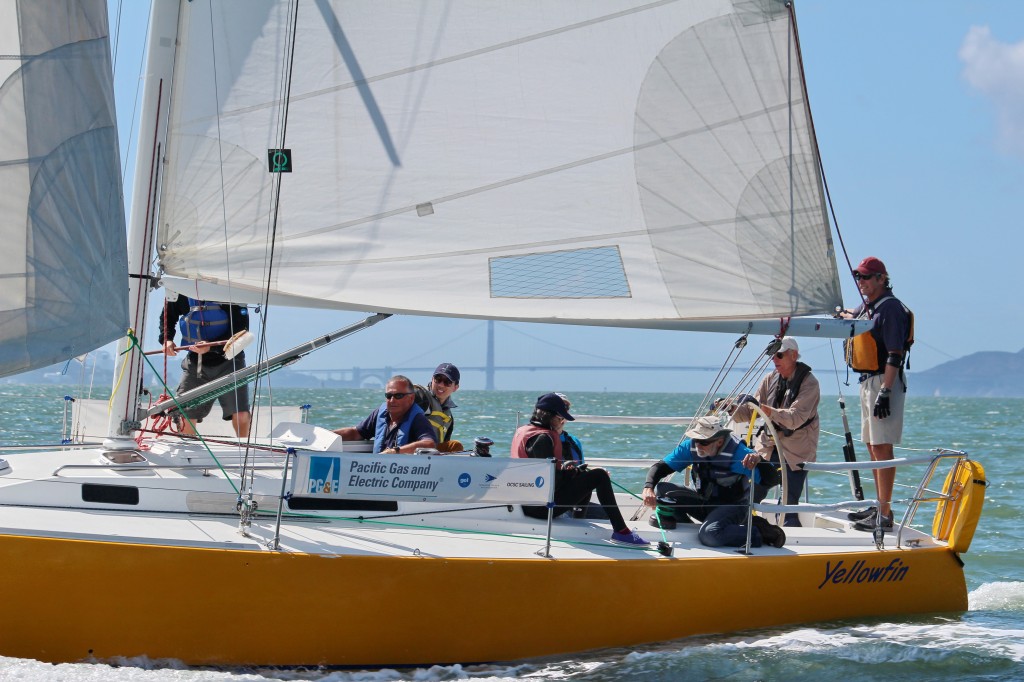 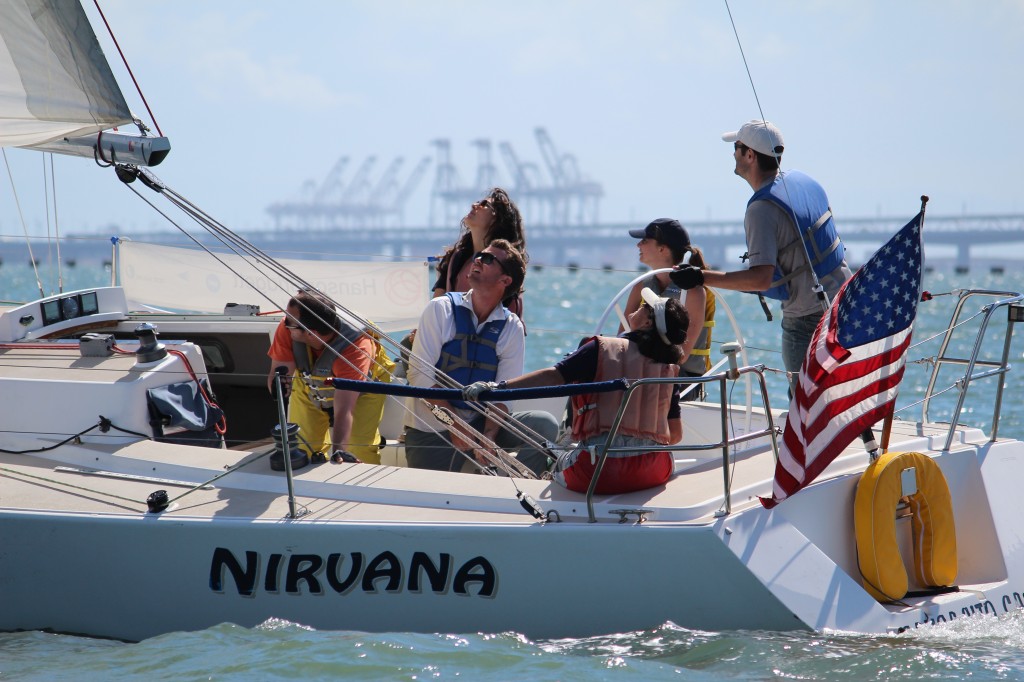 The old eastern section of the Bay Bridge is still be dismantled. In less than two years the bike path – now open from Oakland to the Bay Bridge Summit – will lead to a drop-down path to Yerba Buena Island and Treasure Island. 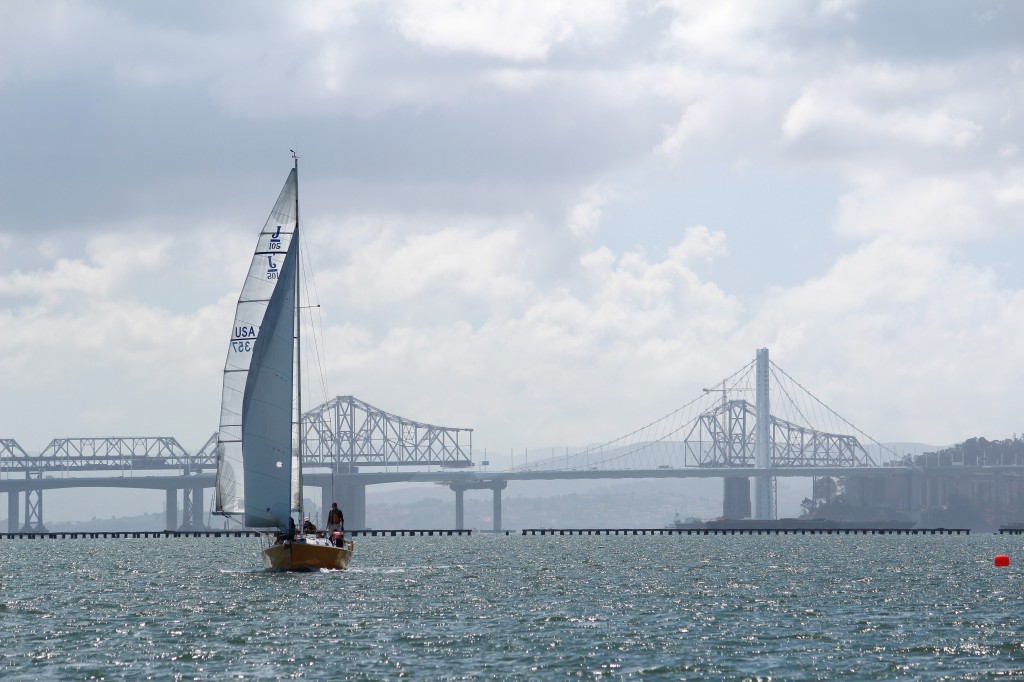 By the last time trial both teams had dropped their times from 12+ minutes to just over 9 minutes. While the fastest time was turned in by PG&E the records will show the margin of victory was around 3% and the Hanson Bridgett team left the course believing they would have knocked another 15 seconds off their time had they been able to run one more trial in the ever-building wind.

After the racing the team from 49 Square Catering served up a hearty lunch with massive sandwiches, salads and more fresh fruit. BIG THANKS to Bay Ship and Yacht for sponsoring the lunch for crew, race committee and coaches. Your support of our programs is greatly appreciated.

Huge thanks go out to Tim Han for taking charge of the planning at OCSC. He was ably assisted by John Mellen as they kept track of two sets of times as both racing teams were on the course nearly non-stop for two hours. 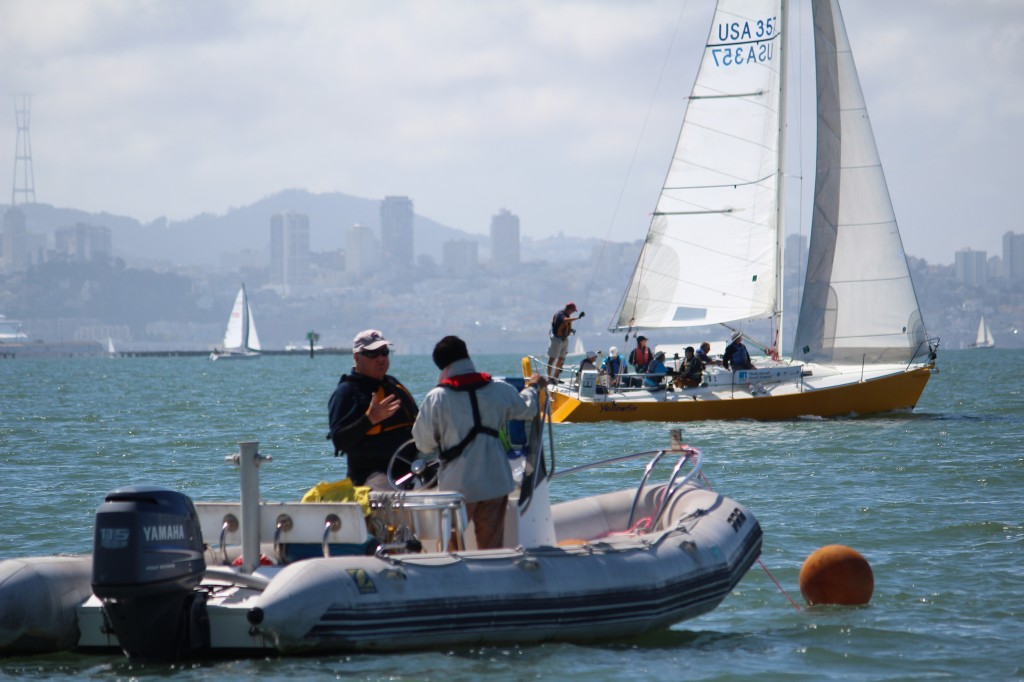 Our special guests for the day were a number of kids from Envision Academy who joined us for the awards ceremony and presentation of the check from Hanson Bridgett and PG&E to Treasure Island Sailing Center.

The $12,000 raised goes directly to the youth and adaptive programs at TISC. Many Envision youth attended summer sailing camps and orientation. 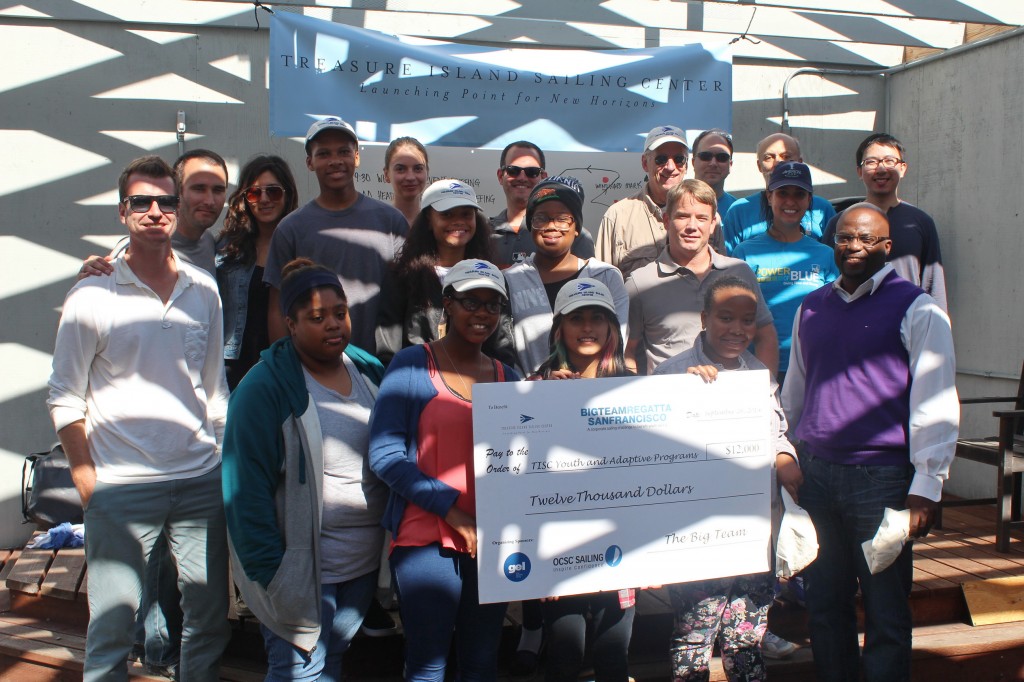 They have formed a racing team – EAST for Envision Academy Sailing Team – and are developing their skills in sailing, communications, teamwork and racing techniques. You may have read our previous blog on teamwork – one of the many life lessons taught by TISC using sailing as a fun classroom. 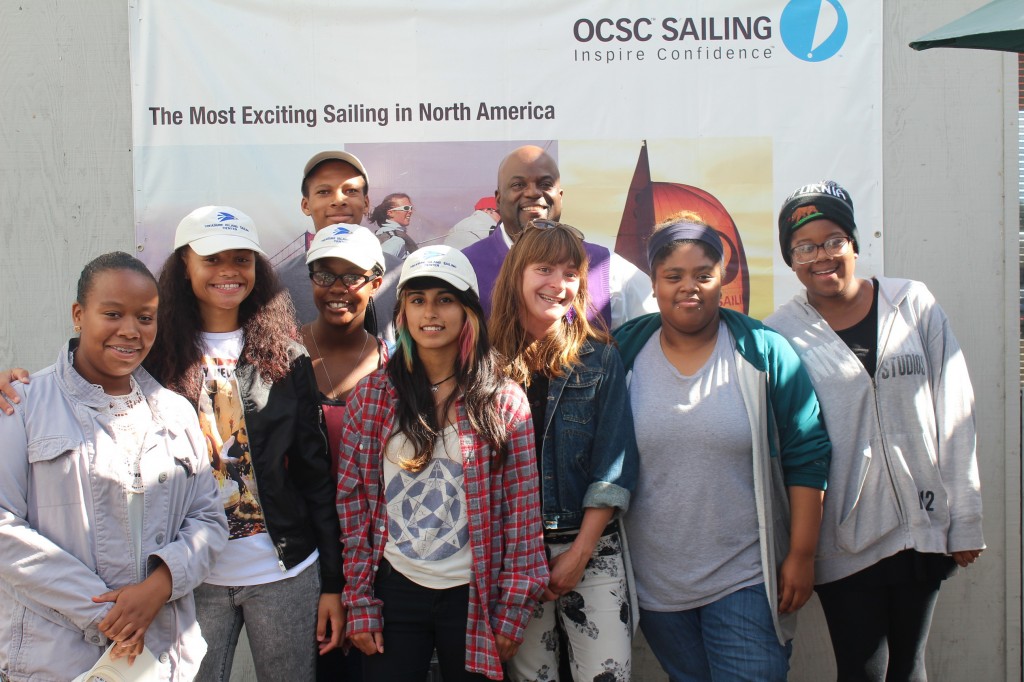 Thanks again to Hanson Bridget and PG&E for their donations support of this 10th annual Big Team Regatta. These two companies have been on the BTR circuit supporting TISC since the regatta’s inception in 2005. And without the support of OCSC, the excitement, teamwork, camaraderie and benefits to Bay Area Youths would simply not be possible.

If your company is interested in participating in the TISC 2015 Big Team Regatta, here are a few slides in PDF format with additional information on the September 25, 2015 Event: TISC-BTR-2015 Overview.   And here is the TISC 2015 BTR Team Entry Form.

Regards from OCSC – on the Berkeley Circle, Dave G

Over 80% of the funds raised by TISC’s 2012 Big Team Regatta went directly to scholarships and programs because of the many gifts in kind provided by our land-based supporters.  Please frequent them, and thank them again for us.

The day started early with registration and briefing.  Everyone enjoyed the fresh-brewed coffee from Peet’s Coffee at 1776 4th street in Berkeley. I particularly enjoyed the double latte on my ride home Friday night after returning the large coffee thermoses that provided a kick start to everyone earlier in the day.

Of course the Noah’s Bagels were a perfect match for the coffee.  Thanks to the Noah’s team near Fillmore& Sacramento in San Francisco for the morning bagels and muffins.

Liz Felando is an instructor at TISC and on the Cal Sailing team.  She prepared the scrumptious chocolate and pumpkin cupcakes we all enjoyed at dinner.

Lagunta’s Brewery in Petaluma goes out of their way to support many community activities. The keg we enjoyed after sailing was courtesy of their team. Stop by for a tour the next time you’re in the area – makes for a fun afternoon.

After the racing we all enjoyed great food from Fine Foods at Home. Kara Forman and her team donated a portion of our dinner, which was excellent.  You too can enjoy their food by ordering on line then picking up dinner at one of their three locations at the 24th St Cheese Company, the NOPA Home Service , or the Noe Hill Market.  You can use their interactive map to see their locations.

TISC supporters have a wide range of unique talents that not only made the day possible but also added to the enjoyment during and after the event.

Thanks again to Rich Jepson and the entire OCSC Sailing School.  They were the enablers for this day of sailing, fellowship and fund raising.  Special thanks to OCSC instructors Ashley Tobin and Jim Watters.  They donated their time and special skills to support BTR.

Scott Keck provided his time as our DJ during the presentations and for music after.  And Roy Miller once again provided hundreds of quality photos for participants and sponsors to enjoy.  His photos are on the TISC Facebook page HERE.

Many volunteers from Cal Sailing and OCSC helped with set-up, registration, on-the-water logistics, meals, and clean up.  THANK YOU ALL

If you have special skills, would like to help out with a donation in kind or simply want to get involved at TISC, let us know.  You can call our office at (415) 421-2225 or connect with us on line with your special skills or interest