Thanks to supportive donors and generous grants our J/24 fleet has grown to seven.  Because of volunteers like Michael, Nigel and Sam, Delos and Barney headed for Pt. Richmond in yesterday’s fog. They’ll look new after Bay Marine Boatworks finishes. 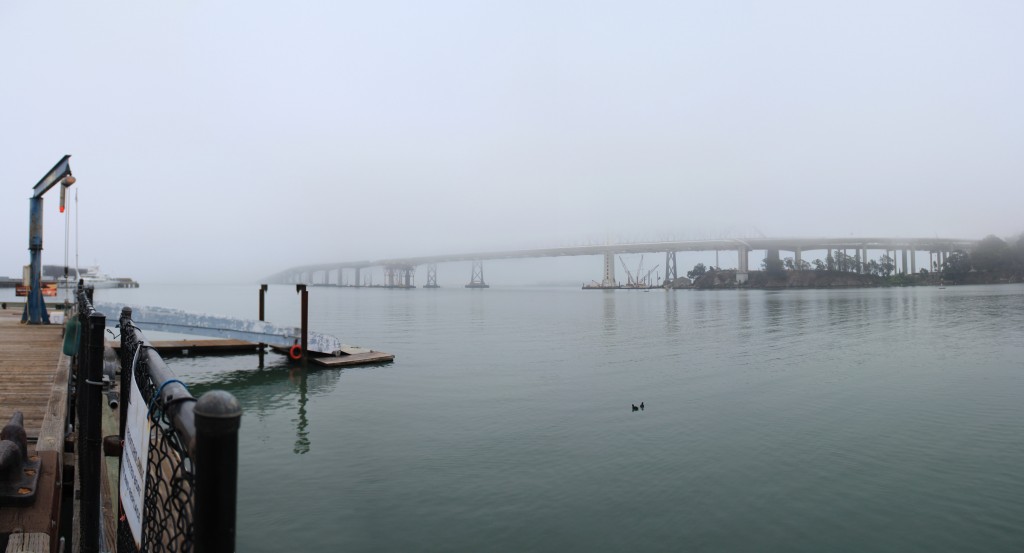 As we drove over the new Bay Bridge back to TISC after delivering two  J/24’s and a trailer to Bay Marine I was struck by the number of people and organizations who made this first step in our fleet renovation possible.  As always the beneficiaries of their generosity are kids in our summer youth classes, year-around outreach program, and just-started SS Learn program. 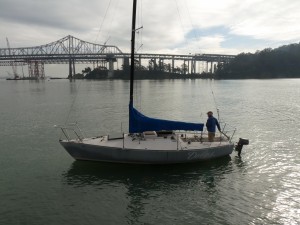 Delos arrived on New Year’s Eve 2009.  I remember the ultra high tide as we motored from Marina Green to TI, arriving to a Bay Bridge still very much under construction.  The motor donated by Adam Slote and the trailer from RIch Jepson at OCSC are still key ingredients to our fleet.  While the bottom growth on Delos was not as populated with marine 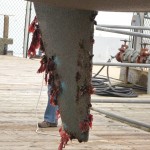 growth as we found on Barney, it did take some serious scraping to remove it.

When I asked Michael Weinman to help with our transit to Richmond, I made sure he knew this was a fun “messing about in boats” job, not the grungy job he signed up for when Barney arrived.  You may recall that clean up job from a previous blog. 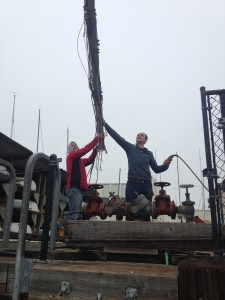 Nigel Tunecliff showed up early Wednesday to help get boats launched and masts out..  We decided to use the 1-ton crane rather than ginn-poles, and with the tide rather low all proceeded smoothly after coaxing a few turnbuckles clockwise. Michael arrived right on time just as we removed the second mast..

With Delos and Skipper’s Gift motors mounted, Michael and Sam Warner got under way slightly behind schedule after a rudder switch on Delos. While starting to lift, the fog was still very much with us as they headed into a rather gray bay to “Red 6” just outside the Richmond Break wall. 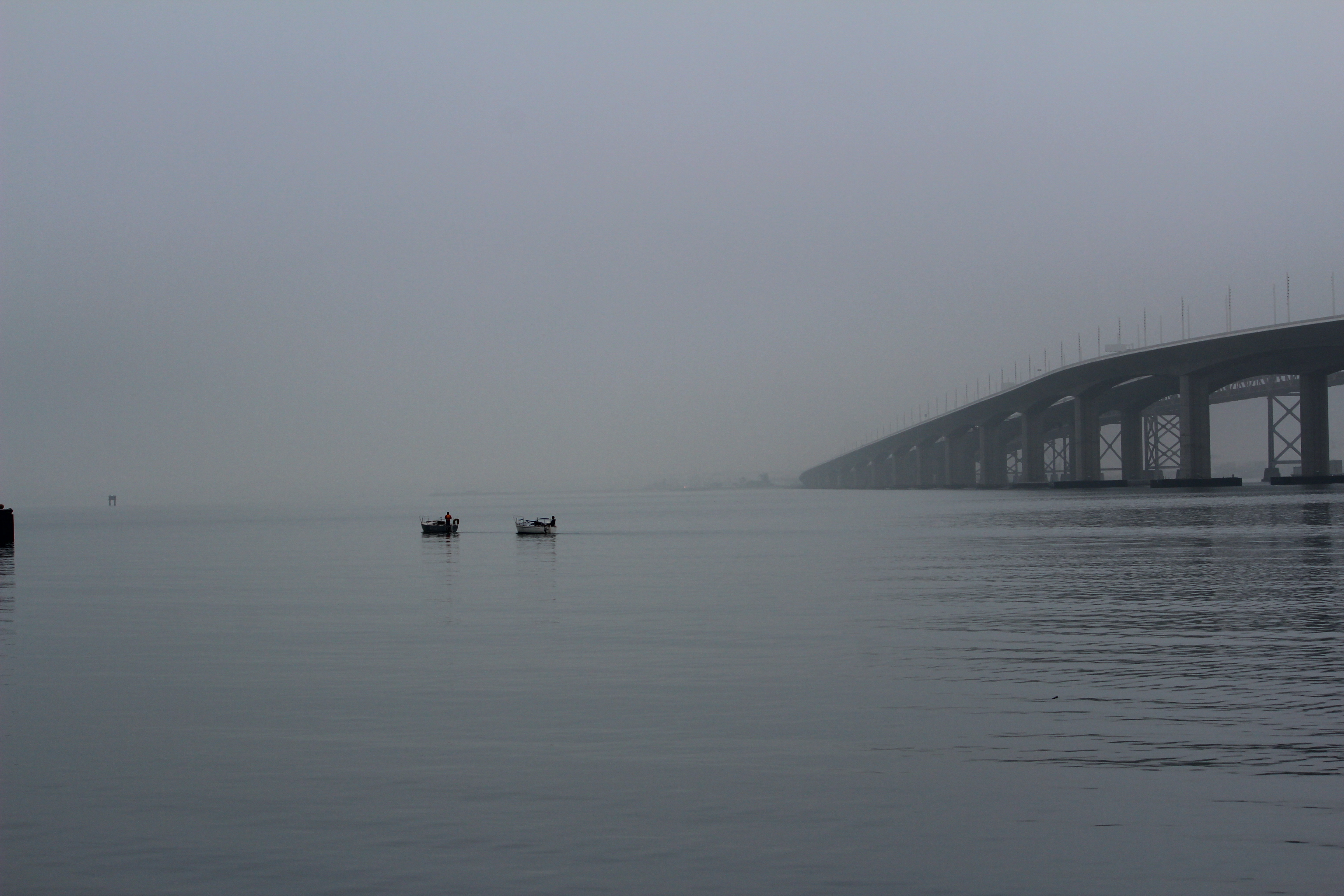 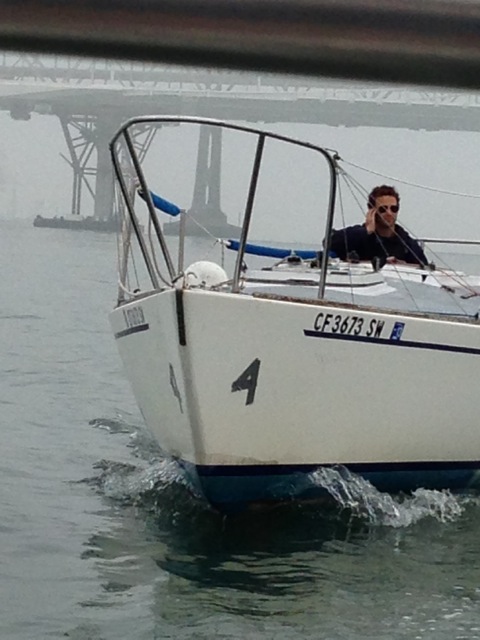 Michael took these two pictures after they turned north at Pier 1 and as they ghosted  past Angel Island. 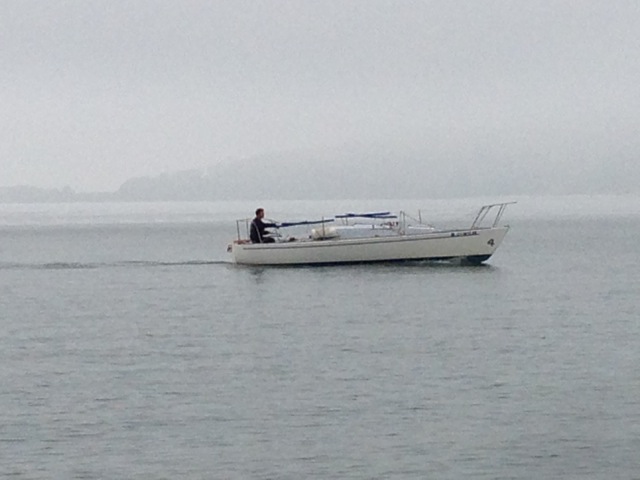 Bay Marine Boatworks will sand and fix the hulls, apply two coats of epoxy, then polish the hulls above the waterline.  To accomplish this they will use our only road-worthy trailer, retired  earlier this year from Moore 24 duty after Karl Robrock’s gracious donation in support of Matt Harper’s gift of Barney.

My plan to get a nice picture with the sun out and two J/24’s teaming into Richmond Breakwater was foiled by Michael and Sam’s rapid transit. They made it just over 90 minutes ! 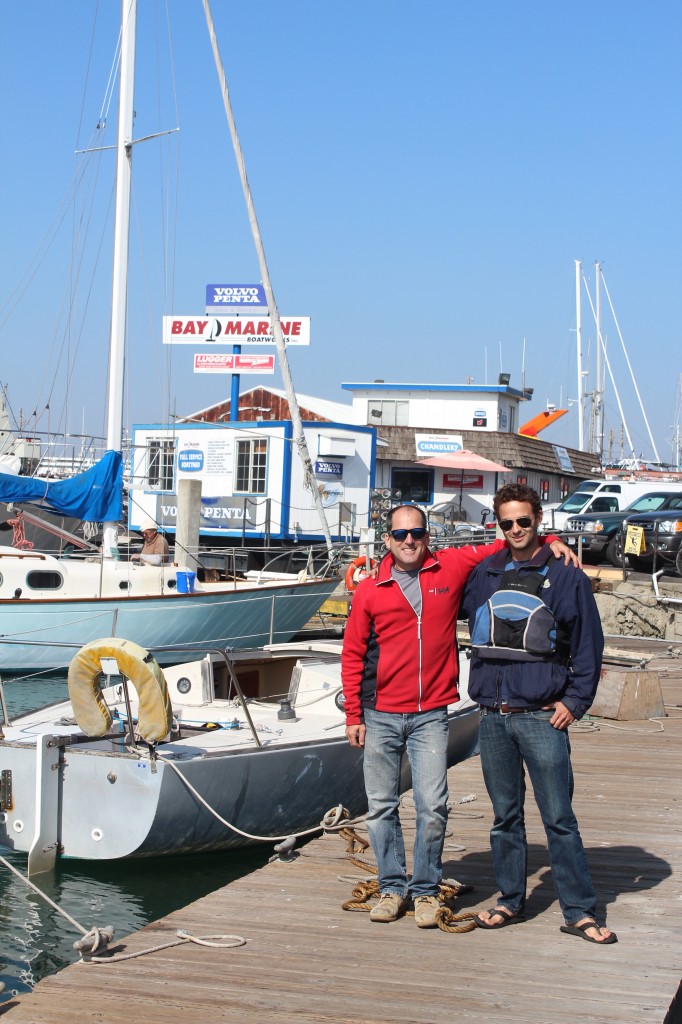 Many connections, donations and volunteer hours lead up to our J/24 Fleet upgrade. The final and most critical was this summer’s donation from Team Luna Rossa via the Americas Cup Event Authority.  Funds from their donation provided the opportunity for the work now being started at Bay Marine, and for the furniture in the new Activity Center now on line to support SS Learn.  Both support our goal of providing launching points for new horizons for kids of all ages.

Regards from On the Cove,